This article originally appeared in Fertility Road magazine and online at FertilityRoad.com.

After nearly ten years of trying to build their family, Heather and Brandon are truly on their way to becoming parents. Following Heather’s embryo transfer in late February, her hCG tests and ultrasound have given them the news they’ve been waiting to hear, and then some! Heather is pregnant – with fraternal twins! 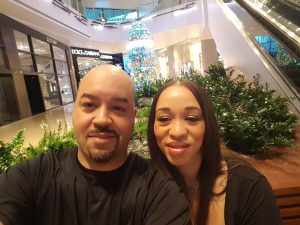 Tuesday, February 20th, my mother and I boarded our flights to Portland, Oregon for my frozen embryo transfer which was scheduled for the following day. Brandon stayed home as opposed to accompanying me on this trip. We could not afford for us to both be off work for the four days. We tried to be practical and have Brandon save some additional vacation days so that we could use them for any emergency that might present itself.

My mother is retired so she was able to join me for the four days. Our long travel days gave us plenty of time for bonding, resting, reminiscing about the good old days, and preparing my mind for what was to come. We also got to relax a bit and catch-up on a few in-flight movies.

It was special for my mother to be able to join me, as she and my father helped us financially pay for the trip and hotel stay. We’re extremely grateful to them for their support and their financial assistance through this process which has been emotionally and financially exhausting.

On Wednesday, February 21st, my mother and I, full of anticipation, walked across the street from the Hotel deLuxe to ORM. My embryo transfer was scheduled for 3:30 p.m. I was given a valium prior to the procedure to relax my uterus. I also played a meditation recording in my headphones to keep me calm, focused and relaxed throughout the process. Many of the members of the ORM team who I have worked with stopped by to say hello and provide hugs prior to the procedure.

Dr. Barbieri escorted me into the procedure room where I was able to see the two embryos on the large screen prior to the transfer. We chose to transfer one boy and one girl from our 14 embryos. Dr. Barbieri talked me through the entire procedure which was quick and she held my hand as she returned me to my in-patient room where my mother was patiently waiting for me.

ORM’s protocol is for bedrest following an embryo transfer. So I remained in my in-patient room laying down for 45 minutes before I was released. Via wheelchair, I was escorted back across the street to the front steps of the Hotel deLuxe. I only walked up the entry steps, to the elevator, and down the hall to our room.

I remained on bed rest for the remainder of Wednesday and all of Thursday. I only got up to relieve myself and was provided with strict instructions not to shower or wash-up until Friday. Essentially, ORM did not want me to be on my feet for more than 15 minutes. For the next two days, room service was our best friend!

On Friday, my mother and I headed back to the airport for our flight home. For the weekend, I took it easy. Brandon took care of me and made sure I had breakfast, lunch, and dinner before starting the next work week on Monday.

For the next week, I continued to take my daily prenatal medications, daily progesterone shots and twice a week delestrogen shots. On Friday, March 2nd, I had my first hCG blood test drawn at 7:00 a.m. so that I wouldn’t be late for work.

Christina, my coordinator at ORM, had told me that if I had an hCG level of 50 or higher on my first test then that would mean I was pregnant. She also told me that I would have two more tests to take, one on Monday, March 5th  and another on Wednesday, March 7th. She said that if my hCG levels doubled each time I took the test then it would indicate that the pregnancy was developing normally at that early stage.

I have to admit that the waiting is torture. You are miserable, lost and feel inept. Later in the day on Friday Christina left me a voicemail. She had the results from my hCG blood test. I was honestly terrified to call her back. I guess I wasn’t ready to hear more bad news, but I reminded myself that we had 12 embryos in storage so if this transfer had not worked then we could always try again.

I waited until I was heading home from work to call her back. After staring at the ORM phone number for an eternity, I found the courage and called. My hCG level was 529. We were pregnant! I screamed at the top of my lungs and cried uncontrollably with joy!

I thanked Christina and immediately called Brandon at his work. He had to remain calm in front of his colleagues who are clueless as to what we are going through. I told him my hCG level and he got incredibly quiet and said, “I need to take a walk.”

Once, I got home, I laid down in the bed with Duke, our dog, by my side and waited patiently for Brandon, who arrived home less than an hour later. He was still in shock and needed reassurance so we called Christina by speaker phone so she could tell Brandon what I had already shared with him.

When you’re so used to hearing “No”, you need reassurance from the experts that the cards are finally in your favor. We were so excited we decided to quietly celebrate! We went out to dinner at a local authentic Mexican restaurant and had one of our favorites, enchiladas.

We made an agreement not to share the news with our parents until we had received the results for the next two tests to ensure we had a health pregnancy.

On Saturday, March 10th, we shared the news with our parents, my mother, and father and Brandon’s mother. They were all uncontrollably happy and excited that their individual journeys to becoming grand-parents were within reach.

We were clear with them that we are not sharing the news with any other parties until the end of the first trimester. We are not making plans for baby showers or picking out names or buying clothes. We are taking this journey day by day with gratitude and patience.

We realize that this is only the beginning and are doing our best to take things step-by-step, but we are extremely thankful and doing our best to live in the moment and appreciate the gifts of life bestowed upon us through this journey.

The entire ORM team is truly overjoyed with the wonderful news of Heather’s twin pregnancy.

Everything we do at ORM is with the goal of helping our patients become parents, and for them to be able to have success and a healthy baby on their first attempt.

Heather’s pregnancy is developing as expected and is now well-established. She has graduated from our care at ORM, and I know that she will be happy to be done with all her various injections which are part of the IVF process. She will now be looked-after during the rest of her pregnancy by her local physician.

We are honored to have been able to help Heather and Brandon and will be continuing to follow their journey closely in the coming months ahead.