Egg Donation: What Are My Options?

Donor Egg: What are my options?

Craig Reisser, a parent via egg donation and surrogacy, shares some expert advice for intended parents trying to make sense of all the donor egg options available to them.

Every year tens of thousands of couples and individuals around the world become parents through egg donation.  In one form or another egg donation IVF has been going-on for more than 30 years.  Many intended parents are able to access egg donation and undergo their treatment in their home country.  For many thousands of others they must travel abroad to access the treatment they require.

Where is Egg Donation Allowed?

Egg donation is allowed in a number of countries around the world.  The USA is the world-leader in terms of the number of egg donation procedures performed annually and Spain is a close second.  These two countries have the largest and greatest number of donor programs; and the highest number of experienced clinics performing these procedures.

According to the European Society of Human Reproduction and Embryology (ESHRE) a majority of European countries permit egg donation in one form or another, with notable exceptions being Germany, Switzerland and Norway.

Four countries – Spain, Czech Republic, Russia, and the UK – represent about 80% of all egg donation procedures performed in Europe based on the most recently available data compiled by ESHRE. Not surprisingly, the first three of these are major destinations for intended parents from within Europe and further abroad seeking egg donation treatment.  Clinics in several other countries in Europe – for example Ukraine, Belgium, Greece, Cyprus, North Cyprus, Austria, Portugal, Poland, Estonia and Latvia – market the availability of egg donation to those considering travelling abroad for treatment.

In most countries national regulations determine whether egg donation is fully anonymous or non-anonymous, typically meaning that a child has the right in time to receive information concerning his/her donor.  National regulations generally also determine the levels of compensation or reimbursement for related expenses, if any, that may be paid to an egg donor.

They may also set out age limits for egg donors and/or recipients; maximum limits on the number of times a woman is allowed to donate and/or the number of donor families she may assist; and other eligibility requirements, including in some countries that a donor already has had at least one child of her own.  In some countries they determine whether there is a national register of women that have been egg donors for future identification and ensuring compliance with the maximum donation limits.

These national regulations, particularly those regarding anonymity and compensation, can have an important impact on the availability and profile of donors in a particular country.

The USA is an exception to this general rule in that there is no national legislation governing egg donation.  The American Society for Reproductive Medicine (ASRM) publishes guidelines concerning egg donation in the USA.  These guidelines are not binding.  So there is a greater range of options in the USA compared to other countries where egg donation is regulated, for example regarding anonymity, the information available to intended parents about a donor, and compensation levels.

What Should Intended Parents Consider?

Knowing where they can pursue treatment is just the first step for intended parents.  Intended parents have many factors to evaluate when choosing their specific egg donation treatment plan.

Frozen eggs have already been retrieved from a donor and are in effect ready and waiting to be selected by intended parents.  There are various egg bank options available and often the frozen eggs are shipped to the clinic that will thaw the eggs, perform the embryology and the transfer to the recipient.  Some countries have restrictions on the import and use of eggs frozen in another country.

Anonymous vs. Non-Anonymous vs. Known Donation:  In most counties whether a donation is anonymous or not is determined by national regulation so intended parents have no choice in the matter.  Fully anonymous donation, where intended parents receive neither profiles of their donor nor have the ability for contact, prevails in the greatest number of cases.  This is the model that applies in Spain and many European countries.

Some countries, like Belgium, allow either anonymous or non-anonymous donation.  Still others like the UK have a system that is anonymous at the point of donation, but maintain a central register and donor-conceived children have the right to information about their donor from the age of 18.  Some countries like Russia have a system that allows intended parents to access a profile with non-identifying details about a donor, but does not permit contact.

In the USA this matter is not regulated and the full range of options from fully-anonymous to fully-known with exchange of contact details is possible.  This is a matter of choice for the intended parents, with the consent of the egg donor, to make and is documented in the legal agreements concerning each donation.  Some egg donation programs in the USA only contain anonymous donors, whereas others contain a mix of anonymous donors and women open to being known.  Programs in the USA provide donor profiles to intended parents.

In the USA there is also an independent organization called the Donor Sibling Registry (DSR) that facilitates indirect semi-anonymous communication (ie. without exchanging contact details) between donors, intended parents and donor-conceived children.  The DSR is voluntary and requires donors and intended parents to each register. This is something typically agreed to prior to the donation.

In other countries intended parents are able to receive donor profiles with varying degrees of information about a potential donor.  Depending on the country and program, these profiles may contain some or all of the following: childhood, and in many US programs adult, photos; physical descriptions; educational and /or occupational background; personal medical and reproductive history; family medical history; relationship and family status; answers to personal questions including reasons for donating; genetic disorder screening and genetic family history; and prior donation history and outcomes.

In the USA, donor profiles can also indicate whether a donor is willing to be known to the intended parents and any donor-conceived child.  This may be either prior to the donation or afterwards for example via the DSR.

In those countries and programs where intended parents are able to view profiles, it is typically their choice as to the donor they wish to work with.

Donor Rationale and Background:  For many intended parents the background and rationale for a woman to donate is an important consideration.

An ESHRE study across donors and clinics in 11 European countries found altruism to be the principal motivation among donors.  Financial motivations related to compensation and/or reimbursement received from being a donor was also a consideration.  The ESHRE study indicated differences between countries as to the percentage of donors expressing purely altruistic, mixed altruistic and financial, or purely financial reasons for being an egg donor. 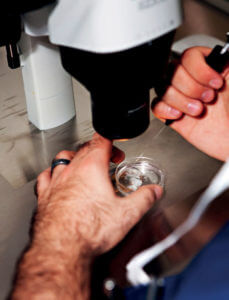 Success rates can be influenced by the particular procedures utilized.  A fresh egg donation tends to have a higher success rate than using frozen eggs.  This is due to the greater potential that frozen eggs may not survive the freezing and thawing procedure required.

In addition, the quality of a clinic’s embryology laboratory; expertise with fresh vs. frozen embryo transfers; the technology a clinic employs for freezing and thawing embryos; as well as whether a clinic offers pre-implantation genetic screening to determine whether an embryo is chromosomally normal before transfer and the technology utilized for this will all impact on success rates.

Cost:  Budget is inevitably an important factor for most intended parents.  The costs of egg donation treatments will vary between countries.  The two major factors determining cost will be the level of donor compensation and/or reimbursement and the costs of IVF procedures at any particular clinic in a particular country.

In many European countries, the level and/or rules regarding compensation is determined in the national regulations.  In Spain, donors are compensated €900 per donation.  In the UK the level is £750.  In the USA by comparison, the compensation levels can vary by program and individual donor.  Between $6,000 and $10,000 is a typical range in the USA and it is standard in the USA for donors to receive incrementally higher compensation levels for each subsequent donation after their first donation.

Total costs will also be impacted by whether intended parents are using a fresh dedicated donation or eggs from an egg bank, as well as whether they are successful on their first attempt or need to repeat all or part of their treatment.

Craig is a regular contributor to Fertility Road on third-party reproduction.  Look for his upcoming articles on egg donation and surrogacy in future issues of Fertility Road or contact him at oregonreproductivemedicine.com.

View the article PDF
Posted in Egg Donation
Back to News