CoQ10 is a naturally occurring compound found in every cell within the human body. CoQ10’s is also known as ubiquinone.  CoQ10 supplementation appears to have the potential in women with diminished ovarian reserve and advanced age to improve mitochondrial activity and energy production. It has also been studied in women with polycystic ovary syndrome (PCOS). 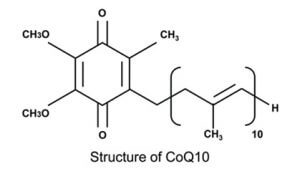 Keep in mind, CoQ10 is a supplement. Rigorous studies utilizing CoQ10 in infertile women with diminished ovarian reserve (DOR) are still lacking. To date, no human study shows a definite benefit for patients with DOR.

Coenzyme Q10 is fat soluble. In the body, CoQ10 exists in either the oxidized form, ubiquinone, or the reduced form, ubiquinol. The body is able to convert the consumed form to the other form as needed cells within the body can perform a redox interconversion reaction to maintain a state of equilibrium between the two forms as needed.

Ubiquinol has been reported to have higher circulating levels and absorption of CoQ10 than ubiquinone. Ubiquinol may be better for elderly patients or individuals with GI absorption problems. There are many different forms of CoQ10 currently available. It appears, that the ubiquinol form may require a lower dose.

Casper’s group appears to have used Ubidecarenone (ubiquinone) in both their animal and human studies.

Here’s a quick review of the recently published human studies:

The use of coenzyme Q10 and DHEA during COH and IVF cycles in patients with decreased ovarian reserve (DOR). CoQ10 (600mg daily)

CONCLUSIONS: Combined DHEA and CoQ10 supplementation significantly increases the AFC compared to DHEA alone, which lead to higher ovarian responsiveness during both COH and IVF, but without a difference in pregnancy rate.

Pregnancy Rates in Patients with Diminished Ovarian Reserve (DOR) Treated with Dehydroepiandrosterone (DHEA) some with Coenzyme Q10 (CoQ10). No dose of CoQ10 stated.

CONCLUSION: The addition of CoQ10 to DHEA in women with DOR/ POI undergoing IVF treatment does not seem to have a beneficial effect over DHEA alone.

Casper’s group using polar body biopsy (PBBX). 600 mg of CoQ10 (ubiquinone) once a day with breakfast, orally, or identical placebo capsules for up to three cycles if pregnancy did not occur. All subjects took either CoQ10 or placebo for two months before the first IVF cycle. Study terminated early due to concerns of polar body biopsy.

CONCLUSIONS: No significant differences in outcome were detected between the CoQ10 and placebo groups. However, the final study was underpowered to detect a difference in the rate of aneuploidy.

CONCLUSIONS: CoQ10 supplementation at 100 mg/d along with Metformin for 12 weeks in subjects with PCOS showed a beneficial effect on glucose metabolism, serum total, and LDL cholesterol levels.